Driving While on Marijuana (and its Dangers)

People are typically unaware of the dangers of driving while high. However, driving under the influence of marijuana is just as dangerous as driving drunk. Driving while impaired can lead to DUIs, car accidents, and even death. If you or a loved one are struggling with marijuana use call us today at 405-583-4390. We would love to answer any questions or concerns that you have.

Additionally, if you believe you or a loved one might have a Marijuana Use Disorder call us today and we can direct you to the correct treatment facility and plan. We want to see you on your way to a healthier, happier, and sober lifestyle.

If you need more information about the effects of weed, then continue reading below. Click a link to jump to that section.

Other common names for marijuana is pot, weed, or Mary Jane. Marijuana comes from the cannabis plant and is made up of delta-9-tetrahydrocannabinol (THC) and cannabidiol (CBD). THC is the psychoactive part of marijuana and it comes from the female plant’s resin that is on the buds and leaves. THC is what alters the user’s reality and makes them ‘high’. Marijuana can get into the body in many ways. A joint is when someone hand-rolls it into a thin cigarette and smokes it. Other methods include water pipes such as bongs or edibles where users mix it into foods like brownies.

How Marijuana Impairs You

Specifically, when a person smokes marijuana the THC moves fast through the lungs into the bloodstream. The chemical then gets to the brain and to other organs in the body. When eating marijuana it takes longer for the THC to consume into the body. Therefore, the psychoactive effects typically take 30 minutes or more. The chemical structure of THC almost replicates a chemical in our brains called anandamide. Due to the fact that it is structured similarly the brain recognizes it and it attaches to receptors in our brains. They are called cannabinoid receptors and are involved with our mental and physical functions.

Due to these altercations, it is unwise to be driving while high. Most people can function quite well while under the influence of marijuana but that doesn’t mean you are in complete control.

Driving Under the Influence of Marijuana

According to the National Institutes of Health, “marijuana significantly impairs judgment, motor coordination, and reaction time”. Thus, driving while high puts you at a greater risk of accident or injury. If weed is mixed with other substances such as alcohol or another drug, the chances are elevated even more.

According to Drugged-Driving Drug Facts from the National Institute on Drug Abuse, “research studies have shown negative effects of marijuana on drivers, including an increase in lane weaving, poor reaction time, and altered attention to the road”.

It is not worth your life to be driving under the influence of marijuana. You are not alone if you did not know any of this information. Many people do not know the dangers of driving while high. At first, weed doesn’t seem to hinder someone like alcohol can. But when it comes down to the safety of driving it is all about impairment. Driving under any kind of impairment is dangerous. Tiredness even counts as an impairment while driving because you can fall asleep at the wheel. Driving while high can cause a car accident just as easily. If you are suffering from an addiction, or know someone that is, then call us today. We will help you get the treatment that is best for you and your needs.

Marijuana car accidents have unfortunately become more common. Blood Alcohol Concentration refers to how much alcohol is in one’s system based on percentages. Blood THC Concentration works the same way but it refers to the amount of THC in the body rather than alcohol. The legal limit for alcohol is .08% BAC. But there isn’t an exact legal number yet to limit and determine the blood concentration of weed. For now, it is using the same limit as alcohol at .08%. Studies have proven that the higher the blood THC concentration in someone’s body was then the worse their driving was.

According to the National Institutes of Health, “marijuana is the illicit drug most frequently found in the blood of drivers who have been involved in vehicle crashes, including fatal ones. Two large European studies found that drivers with THC in their blood were roughly twice as likely to be culpable for a fatal crash than drivers who had not used drugs or alcohol”.

These marijuana driving statistics show that an individual is twice as likely to get into a car crash because of how weed can impair your driving. The higher the levels of THC the more likely you are the one responsible and the cause for the accident. There is no need for it to get this far. There are too many ways of transportation available to justify getting into a car while high. If you are impaired and need to get somewhere, consider first calling a friend, getting an Uber or Lyft, or taking public transportation. There is no need to risk your life by driving under the influence of marijuana.

There are laws surrounding driving while high depending on what state you live in. Furthermore, it is illegal in every state to be driving while high when impairment can be proven. Blood alcohol concentration of .08% or higher can get an individual convicted of a ‘per se’ DUI. This is the same system followed for drugs because ‘per se’ has to do with the quantity of the substance in one’s system. If you are pulled over by a police officer, you can receive a per se marijuana DUI if you produce a blood THC concentration over .08%.

Depending on what state you live in, impairment DUI laws can vary due to their definition of impairment. Mainly, evidence has to be shown in order to prove that there was a  significant amount of marijuana ingested and that it did affect the driver’s capabilities.

According to a NOLO Press, “evidence of impairment usually comes from the arresting officer’s observations” those observations can include:

If the arresting officer can prove and provide evidence that the individual was driving under the influence of marijuana, then they can get convicted. The consequences are similar to an alcohol DUI conviction. According to a NOLO Press, the first offense of driving while can include punishments such as:

However, if this is a second or third offense the consequences will be stricter. Especially if a car accident occurred involving an injury or death. Marijuana driving deaths spike when legalization occurs. A study conducted by Tyler J. Lane and Wayne Hall was published in the Society for the Study of Addiction. It was called “Traffic fatalities within US states that have legalized recreational cannabis sales and their neighbors.”

According to the results, “In the year following implementation of recreational cannabis sales, traffic fatalities temporarily increased by an average of one additional traffic fatality per million residents in both legalizing US states of Colorado, Washington and Oregon and in their neighboring jurisdictions.”

Driving while high is not worth the risk of arrest, injury, or fatality. There are enough marijuana car accidents that occur that end up ruining people’s lives. If you didn’t know the risks of driving while high that is okay. Now you know to not drive while under the influence of marijuana. Do not suffer these consequences alone. Call us oday and we can help you. Our trained specialists will make sure you get the treatment you need.

A person cannot get addicted to marijuana like they can to another drug. Marijuana does not chemically alter the brain permanently as cocaine or heroin can. Marijuana doesn’t have addictive properties in the substance itself. However, marijuana can be misused overtime creating a misuse-disorder and dependency.

Becoming dependent on marijuana can mean that you don’t want to stop taking it. If you do stop taking it, you might feel certain symptoms that you would rather avoid. For example, according to the Marijuana Research Report, if you frequently use marijuana and suddenly stop, you could experience:

All of these side effect symptoms will appear within the first week of stopping and can last 2 weeks. These are difficult and uncomfortable reactions which are often the reason for the inability to permanently stop using. Dependencies can happen with any substance, even coffee! But you will need to seek help if you are struggling with a marijuana misuse disorder.

According to the Marijuana Research Report, “9% of people who use marijuana will become dependent on it, rising to about 17% in those who start using in their teens. In 2015, about 4.0 million people in the United States met the diagnostic criteria for a marijuana use disorder; 138,000 voluntarily sought treatment for their marijuana use”.

There is treatment available for Marijuana misuse. Call us today and we can help sort through all of your concerns. There is a treatment program out there for you, so call us at 405-583-4390 and we will help guide you through this process. 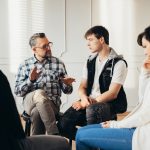