What are the physical signs of meth addiction? If you suspect that someone you love may be using this highly dangerous and addictive drug, then the answer to this question is where you begin to try and help.

For many addicts, life has become an everyday struggle. Relationships that were once happy and healthy have become painful and broken.  Where does one start looking to figure out what is really going on? The physical signs of crystal meth addiction could be where the answers are hiding. The signs of meth addiction could prove to be a starting point in turning someone’s life around. Contact our professionals at 405-583-4390 for help figuring out how to move forward.

Is someone you love is acting very differently lately? The indications and signs can be very easy to spot. These are some common signs of meth addiction:

During meth use, an individual’s pupils become dilated. Their heart rate increases dramatically. Most often, they show signs of physical exertion, such as raised body temperature and profuse sweating. Meth users are usually experiencing agitation, frustration, and nervousness. Meth is an extremely strong stimulant; it can cause users to feel that they don’t need sleep or food for days at a time. Because of this, they start looking gaunt, drawn, and undernourished. These signs of meth addiction should be taken very seriously. Without help, the harsh chemicals in meth cause oral deterioration, increased acne, skin sores, serious health issues, and sometimes death. Call us today. We can help you or anyone you may be concerned about. Call us and get help from our specialists today.

Meth is a powerful, highly addictive stimulant that affects the central nervous system. Scientifically known as methamphetamine, it also goes by the street names crystal, crank, speed, ice, and glass. Smoking, snorting, swallowing, or injection are the most common. The effects of meth generally last from six to eight hours but can last up to twenty-four hours. The first experience might involve some pleasure, but make no mistake, meth begins to corrode the user’s life right away.

Meth is usually a white or clear-looking crystalline drug. Sometimes it takes the form of clear glass-like chunks or shiny bluish-white rocks.  It is a popular party drug, most often administered by smoking from a glass pipe. Users may also snort it, swallow it, or inject it into a vein.

Meth is a man-made stimulant that has been around for more years than you might think. In the World War II era, soldiers were given meth to keep them alert. People have also taken the drug to lose weight. The only meth product currently legal in the United States is a tablet used to treat obesity and attention deficit hyperactivity disorder. These tablets are available only by prescription, and the dosage is far lower than recreational products.

It is hard to pinpoint where meth is hitting the hardest, but its popularity is reflected in increased emergency room visits across the country. Amphetamine-related admissions to hospitals soared by more than 270 percent between 2008 and 2015.

While meth is found across the United States, the highest availability seems to be the western and mid-western regions. More than 70 percent of law enforcement agencies report that meth is the greatest drug threat from the pacific and west-central regions of the U.S.

In 2017, approximately 15 percent of all drug overdose deaths in the U.S. involved methamphetamine. The states with the highest rise in meth overdose deaths were Washington, Colorado, Texas, Florida, and Georgia. Call us today and we can help try to prevent future hospital visits. Do not b afraid. Call us today.

Signs of Meth Use

What does someone on meth look like? They will often show signs of premature aging, especially in the face. Their skin may develop sores and pimples. Many long-term users report a sensation like bugs crawling beneath their skin. These sensations, along with the paranoia that is meth’s best-known psychological symptom, can cause users to scratch and pick compulsively.

In fact, those addicted to meth simply stop taking care of themselves. The picking and scratching lead to open sores, which become infected. Most users do not seek treatment for these sores. You can usually see numerous scabs and open wounds on their faces, arms, and legs. Open, infected skin sores can cause other negative health issues, such as staph infections, MRSA, or septicemia.

Many use meth to increase wakefulness, spur physical activity, and decrease appetite, but probably the main reason for its popularity is the intense euphoria it produces. Meth use creates a false sense of energy and well-being in the beginning. The substance user will tend to push their body faster and further than it is meant to go.

Meth is a highly potent drug and affects both physical and mental functions. Those who use it regularly are likely to feel that there is simply no way to stop. It is imperative to seek help to save one’s life. Before early death from meth occurs, other common negative effects include disturbed sleep patterns, hyperactivity, loss of appetite, nausea, dilation of pupils, high blood pressure, increased heart rate, panic, seizures, delusions of power, increased aggressiveness, violent behavior, and irritability. Other serious effects can include insomnia, confusion, hallucinations, anxiety, and paranoia. Are you experiencing the effects of meth? Then call us today. We will help you get the proper treatment for your situation. Do not wait until it is too late. Call now, and get started on a healthier life tomorrow.

Long Term Meth Use is Harmful

Using meth long-term has many negative consequences that accompany the high risk of getting addicted. Addiction is a chronic disease, described as compulsive drug seeking and repetitive use, accompanied by functional changes in the brain. Most people suffer negative behavioral and neurological effects from using meth long term. Additionally, there are other physical consequences besides weight loss and sores: hair loss, poor nutrition, tooth decay, and tooth loss. Tooth-grinding and dry mouth are two more side effects of meth use which, while seemingly minor, greatly exacerbate dental issues. In some cases, meth use can cause convulsions that lead to death.

Those who use meth long-term may manifest psychotic tendencies. These only worsen in response to stress, which as you might imagine is frequent for a person in active addiction. Furthermore, the psychological symptoms can last for months or years after a person has quit using it.

Is the Damage Permanent?

Meth use greatly increases the risk of stroke, which can cause irreversible damage to the brain. There is a higher incidence of Parkinson’s disease among past users of meth. Many chronic meth users undergo severe functional changes in areas of the brain associated with emotion, memory, and thinking ability.

After several years of abstinence from meth use, some brain functions can show marked improvement. These include motor skills, performance, and verbal memory. However, some brain regions do not recover even after many years of abstinence, indicating that some meth-induced damage is very long-lasting or possibly permanent. While some damage might be irreversible, we will make sure to help you as much as we can. Our top priority is getting you the help you need. So, do not hesitate. We will help you in every possible way we can.

What exactly is dopamine? Dopamine is a type of neurotransmitter. Your body makes it and your nervous system uses it to send messages between nerve cells. That is why it is sometimes called a chemical messenger. Dopamine plays a role in how we feel pleasure as well as in the ability to think and plan. Meth use can result in brain damage including memory loss and an inability to think clearly. Those who recover are usually subject to memory gaps and extreme mood swings.

Exposure to meth results in vastly negative consequences to the neurological system. It also produces a range of other adverse effects. Meth can have adverse and potentially fatal effects on arteries and blood vessels, causing them to spasm and constrict. This leads to dangerous spikes in blood pressure and the heart’s electrical system, as well as other potentially fatal heart-related problems. There is a clear association between the use of meth and cardiovascular disease. “Cardiovascular disease represents the second-leading cause of death among methamphetamine users, following an only accidental overdose,” according to a journal of the American Heart Association.

When looking at overdose numbers, opioids seem to be a much bigger problem. But although meth users might not be overdosing as much as opioid users, many of them are dying of other issues such as heart attacks and heart failure. Some meth users try to get clean. Unfortunately, meth-induced damage to the cardiovascular system can really limit the ability to function in society. Do not face the devastations of meth alone. Contact us today and we can help make sure you do not face anything by yourself. Work with us and get started on the path to sobriety now.

People addicted to meth have teeth that are blackened, rotting, stained, crumbling, and falling apart. More than likely, the teeth cannot be salvaged and must be removed. This extensive tooth decay is caused by physiological changes from the drug which results in dry mouth and long periods of poor oral hygiene.

The more meth used, the worse the tooth decay becomes. Meth users who were 30 years of age or older, cigarette smokers or women were more likely to have tooth decay and gum disease. An examination of the mouths of 571 meth users showed:

Cutting the Bond to Meth

Withdrawal from meth happens when a chronic user stops taking the drug. Symptoms include depression, anger, anxiety, fatigue, and an intense craving for the drug. Meth addiction is one of the hardest drug addictions to treat. However, getting free of meth is possible.

In general, someone who tries to quit meth can experience severe depression, anxiety, psychosis, and suicidal thoughts. They may have sleep problems lasting for more than two weeks. Many may need treatment with antidepressants, anti-anxiety medication, or sleep aids. It can be difficult to treat these problems because it takes a long time, usually months, before brain chemistry improves. In very severe cases, the damage done to a meth addict’s brain can be permanent. Moreover, the most effective addiction treatments are those that include cognitive-behavioral therapy, individual counseling, education on drugs, and relapse prevention programs.

The negative effects of meth do not only impact the user; they also hurt, harm, and destroy the relationships of everyone around the addict. If you know someone with a meth problem, please get help for them, and some relief for yourself as soon as possible.

Finally, there are many things you can do to help yourself or your loved one through this difficult time in their life. It is important to remain supportive yet firm about getting help. If you want to talk to someone about how to get treatment for their addiction, contact our dedicated professionals for help. 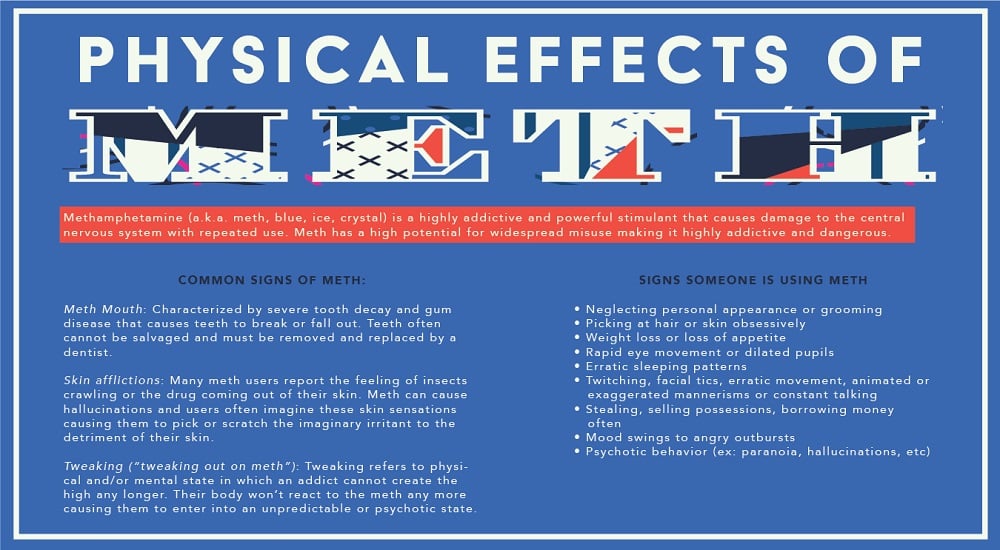 I Can’t Live Without MethDrug Addiction