What is IV Drug Use and How Will Affect You

According to the most recent World Drug Report, drug abuse kills about 585,000 people worldwide. This affects and hurts thousands of friends and families every year. But if your loved ones are having a hard time struggling with drug addiction, the best thing to bring him/her to the nearest recovery programs rehabilitation. IV drug use is one of the main causes of death, due to the increased risk of overdosing.

What is IV Drug use?

Intravenous drug use means directly injecting the substance into a vein. People generally use a hypodermic needle to inject drug substances into the body. Injecting drugs intravenously these days is also known as ‘shooting,’ ‘banging,’ ‘hitting,’ ‘slamming,’ and ‘mainlining.’

Most substance addicts usually start smoking, snorting, or ingesting some substance until their substance dependence increases that they seek stronger, faster highs and, eventually begin abusing substances such as heroin and cocaine intravenously.

They choose to inject intravenously because it has more powerful and instant effects. Few consider that injecting these substances can cause harmful health effects and permanent damage, making it a highly risky practice. There are some possible health consequences of using a syringe to inject substances, some of them are infections, cardiovascular disease, and overdose.

The presence of skin infections among IV drug use is often typical. Skin infections usually present as areas of swelling, warmth, and soreness (inflammation). This is because the skin, venous and lymphatic systems are damaged.

Some effects of IV drug use are:

Although HIV transmission is quite sporadic, it remains a health hazard in environments where syringe use is shared, as in often the case with intravenous substance abuse. Sharing needles or failure to adequately disinfect the equipment can lead to the direct spread of blood-related conditions, including hepatitis and HIV.

This is a condition when the heart valves or the inner lining of the heart chambers (endocardium) is infected and then becomes inflamed due to repeated intravenous substance use.  This occurs when infectious organisms, such as bacteria and fungi, enter the bloodstream and settle in the heart. Bacteria from poorly sterilized needles can lead to this condition. If left untreated, it can damage or destroy the heart valves which can lead to life-threatening complications.

The threat of overdose greatly increases when drugs are directly injected into the body.  Drug addicts usually don’t know how much of a substance they are injecting into their system, because of the fast reactions of the drugs and the strength of the effects. Overdose symptoms can include very low blood pressure, slowed breathing, stillness, coma, shock, and death.

IV drug use is obviously prevalent in our society. Only a few absolutely understand the dangers of this deadly habit. It can lead to many complications ranging from permanent scarring to even death. Learn how to avoid death caused by intravenous drug use by visiting an affordable recovery rehabilitation program. 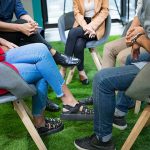 How We Talk About AddictionDrugs